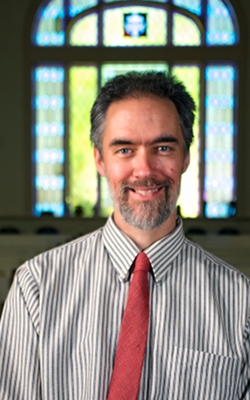 Dan Hummel was the Associate Pastor 2010 through 2017, and for a year he served as the Interim Pastor until January of 2019, when the church called him to be the pastor.
Dan began attending First Congregational Church of Hartford, Wisconsin, in 1993. Dan has a BFA in Musical Theater and Opera Production and often designs lights and sets for the Acacia Theatre Company, and for Concordia University where he is a professor of technical theater and design. Dan is a member of the IFCA International. He has formulated a class based on Dr. Lewis Sperry Chafer's Systematic Theology. Dan and his wife Terese own Hummel Media, which produces video, music, theater, websites, and well, media. They live in Hartford where they homeschooled their four children and are still active in the public school in that area.